The Real Uganda is a non-profit organization that sources international volunteers for locally-led, community-based initiatives in Uganda. Communities get helping hands and exposure to the outside world. Volunteers learn a new culture and approach to life.

Every volunteer should expect at least a minimum of culture shock. I’d say that it takes around 3 days to get over your jet lag and another 5 to start settling in properly.

However, culture shock moments can happen even months after your arrival.

There’s absolutely no way to completely prepare yourself to volunteer abroad. But once you get through that first (tough) week, you’ll learn more about yourself and your new environment than you ever could have, from the comfort of your own home. 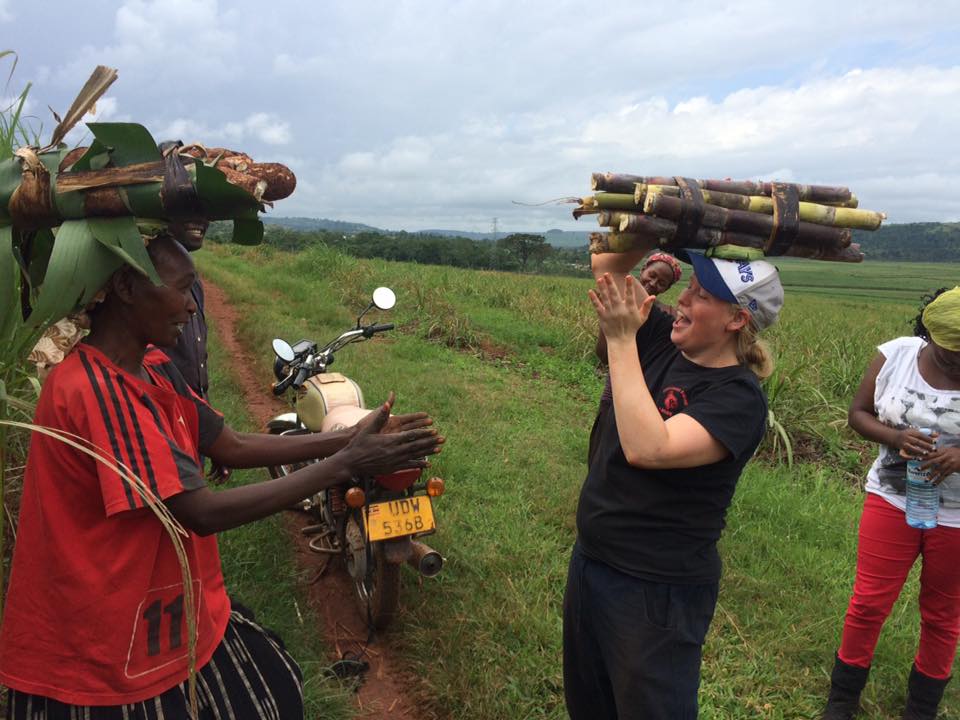 Kristen and Pauline transporting some sugarcane.

I love polling our volunteers about their own favourite culture shock moments. Their stories are always fun, and often quite telling about traveller preconceived notions. Thanks everyone for collaborating with me to tell the world about the reality – both amazing and totally random – of Uganda.

Here’s to sharing and learning and traveling and growing!

“I remember feeling quite numb after arriving. Having a game or two with the children, helping Aunt Liz with the chores, even the pit latrines weren’t a big shock. The free range parenting shocked me a little though. Kids as young as five or six (who where I am from are still very much children) are lighting fires and dragging around machetes!” Hannah, 2015. 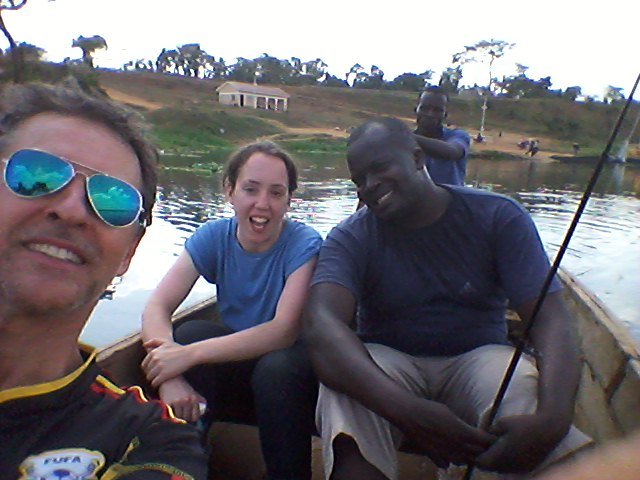 Hannah with Travis and David on the River Nile

“The amount of conversation on your way to work. Having people want to stop and learn about you and your day, and learning so much about everyone else in the neighborhood. Truly a unique and awesome experience. I got back to the US and definitely had some weird looks when I started greeting random people on the street out of habit!” Kat, 2014.

“Rolex being a street food, not a fancy watch, and sooo much more useful and yummy!” Staci, 2011.

“Honestly it was seeing two different ways of living so close to each other. You drive out of Mukono and there’s villages and people living in huts with very select amounts of food, with people who may never have even used a computer before. Drive back into the town and there’s cars, computers, bars blasting music, etc. Two very different worlds.” Harveen, 2011.

“My first cold water bucket wash, brrr that took a little getting used to.” Jennifer, 2014.

Jennifer, relaxing at our guesthouse with wine and bananagrams.

“Having to straddle my first outdoor pit toilet AND avoid stepping on a giant cockroach at the same time. Oh, also seeing a giant cockroach perched above me INSIDE the mosquito netting covering my bunk on the first night. I don’t like cockroaches.” Renee, 2014.

“I found myself randomly remembering the little plastic baggies of gin the other day ….” Yvonne, 2007.

Check out Zan and these chickens:

“I am waved at by every single person in the street. And realizing that these kids live with very few things yet they are grateful and happy. What a first week lesson!!” Catarina, 2016 and 2017.

“Buying a friend a duck as a gift… It was put in a bag so I could take it to Mukono… during the matatu ride people asked me when I planned to eat my duck, and the looks of utter confusion when I explained it was going to be a pet for a friend were epic. The duck then bit a small child while she was sleeping on her mother’s lap and started quacking at everyone… then an older man grabbed the duck by the beak and told me: “you must get control of your duck, mzungu”.” Sarah, 2009

“Coffin on the back of a motorbike…got me every single time.” Ian, 2009

RELATED: THIS is what volunteering in Uganda looks like

“I took a couple of the kids from the school over to the clinic because we suspected they had malaria. It took forever for the kids to be seen, and when they were, I was told they needed hypodermic needles in order to get their blood tested, and they don’t have needles at the clinic. The children took me to where we could find the needles… In the middle of a field, way off the road in a mud, stick and thatched-roof hut. They sold only ginger beer and needles. About 8 US cents each. I found it funny that things like AIDS medication was free but they don’t have needles. The needles seemed to be sealed. But they were one size fits all.” Gwen, 2013

“Pedestrians not having the right of away, pooping in a hole…. Also how friendly everyone was. It was a bit overwhelming the first day or two.” Ali, 2015.

“Riding into Jinja to white water raft and your matatu hits a monkey. Nothing you can do but gasp with your fellow Ugandan riders.” Caroline, 2006

“First day in the village and I helped a goat give birth…or the time I spent hours trying to catch a hen and then a 5 year old came and caught it in less than a minute!!” Gustavo, 2016

“The welcome reception done by the elders when we arrived at the village, with the ladies all wearing beautiful traditional dresses (I felt so under-dressed!)… the fruits, the colors, the smiles…seeing how handicapped children/teens are thrown aside by their families, and given no chance to show they can be great contributors to society.” Margarida, 2014

“There was a moment when I took a bodaboda (motorcycle) to the village to charge my mobile when I realized that for the first time in my life I was the absolute minority. Everyone was lovely!!!” Cathy, 2015

Hey Cathy, Grace Daycare is now connected to Uganda’s electrical grid. Everyone can charge their phones on sight!

“When some visitors came to the project they brought gifts- out of the trunk of a sedan they pulled out a large bundle of bananas, a chicken, as well as a very pregnant goat…” Margaret, 2014

“Getting halfway through my 10:30pm dinner only to realize I was eating silverfish!! Since I was so hungry, I thought it had just been veggies and rice and didn’t notice all the small eyes for a while, but it gave me quite the shock once I did.” Nandini, 2016

RELATED: How to Stay Safe and Healthy While Volunteering in Uganda

Cooking over an open fire

“Coming home and realizing with a great sense of shame that we literally pee and poop into clean drinking water.” Lori, 2014

“Riding a bodaboda comfortably sandwiched between two others (or hanging off the end and gripping the seat with white knuckles), as we navigated rutted and dusty dirt roads, struggled up hills, passed waving, cheering kids yelling “muzungu,” and sailed across vast oceans of sugar cane fields in the cool morning mist.” Renee, 2014

“The rainstorms on the tin roofs of village houses! I recorded it and listen to it every time I need a fresh awaking to man vs nature! A sound you never hear in most USA houses…” Staci, 2011

Staci, I’m just the opposite these days. Every time we have a light rain shower in Uganda, I sing “Rain on the Roof” by The Lovin’ Spoonful. The sweetest tune ever.

“The giant cockroaches that came out of the “toilet” hole while you squatted over them. Still having nightmares about those.” Jennifer, 2008

“The night sky without electricity (not a culture shock as such but AWESOME). Also I offended some folks by wearing trousers to church on my second day, it was really a miracle I was in church at all. The food was a culture shock- but a good shock- I had such great food, crispy pork, fried fish, lovely chicken, and I loved all the stodgy stuff that came with it. Very comforting.” Dawn, 2008

“We were doing rural outreach. There was a big billy goat who got an erection, licked it until he ejaculated, then proceeded to eat and lick up all the semen. I am still traumatized…” Lee, 2006

And on that note… how about some reverse culture shock? I hear it’s worse coming home to find nothing has changed but your own perspective!

“Water really can come out of a tap. And then there was soap in a bottle. So weird after living up country.” Kathy, 2006.

“Running [in Canada] on a cold day in June, with no children even considering playing in it… Also, no one running out of their home excited to see me and say hello (so disappointing lol)! Also, how much westerners complain.” Kristen, 2015 and 2017.

“I remember standing on the side of the road [in America] and not being able to see a single other human being anywhere. Everyone was either in their cars or in their homes or going between places. Not a single person was anywhere. It felt like the loneliest place I’d ever been.” Jeff, 2005.

“After spending time in Nakifuma, Butebe village, and even Mukono town, it’s always a reverse culture shock to go to Lugogo or Acacia Mall in Kampala. Realizing how much stuff we don’t need at all always gets me!” Ellie, 2015.

“I felt I belonged from the minute I landed in Uganda. Returning to NZ I couldn’t feel the sense of community that I felt in Uganda. I kinda liked being called ‘designer swagger’ by the ladies in the Lugazi market.” Zan, 2014 and 2016.

“I took a shot of this about three years ago, it was horrible and did nothing for me. And yet, it sits in the back of my frequently used liquor cabinet and I’ll probably always keep it.” Marissa, 2007.

Holy crap, Marissa! It’s been 10 years since you were with us!!!

Want to create your own memories? Admittedly, it’s not always sunshine and rainbows when it’s happening, but volunteering and immersing yourself in a new culture will give you an exposure to the world in ways traditional tourism simply can’t.

If you think this type of experience is something you may enjoy, spend a little time on this website. If you like what you read, fill in our online application form. We’re looking for volunteers ready to jump into new experiences and have their world view challenged and forever changed.

View project reviews of The Real Uganda on Volunteer World